During the summer break, the OLW elementary school building is receiving new, energy efficient windows to replace the original 1950’s windows. This project was originally discussed during a previous capital campaign but was shelved due to the economic downturn in 2008. The need for new windows was reexamined and then identified to become part of the “To Teach Who Christ Is” campaign in 2015. A total of $2.6 million was pledged by generous OLW parishioners, and this project was given the go-ahead. 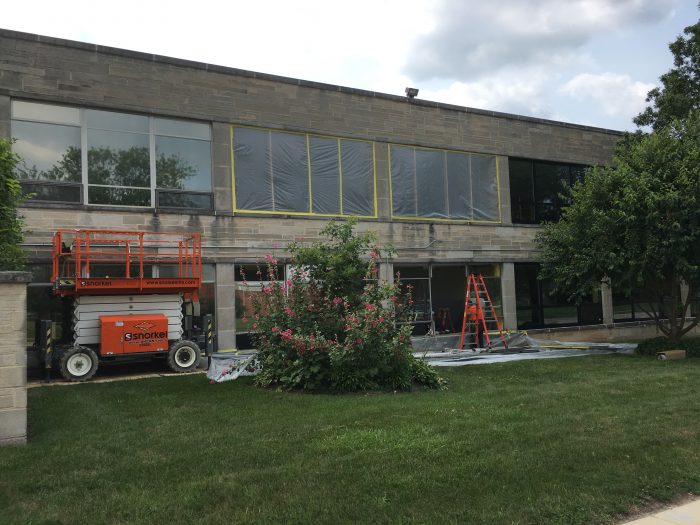 Father Arthur, Ewelina Sokolowski (Director of Operations), David Wood (Principal), and the Parish Finance Council were strongly in favor of making this project happen in 2021. Replacement of the windows had to be scheduled for the summer months, so Finance Council began discussions in November 2020 to ensure an order could be placed at the end of February 2021. “Putting the project back at the top of the list was really important to Finance Council and Father. Investing in our school is essential to its growth and longevity,” said John Brady, a Finance Council member involved in the process. 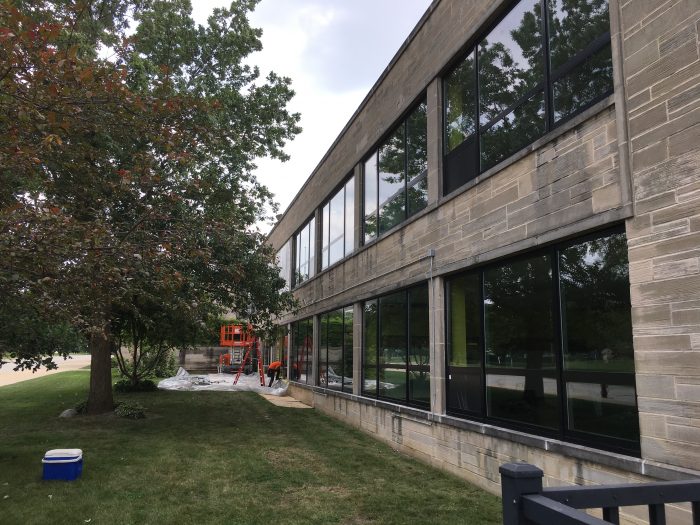 The Archdiocese of Chicago has a specific process for parish capital improvements exceeding $300,000. Consultation was required with the Facilities and Construction department of the Archdiocese, an architectural firm, the State Fire Marshall and the Village of Arlington Heights to ensure that codes were followed and a permit was issued. Window specifications for insulation values, ventilation, emergency access and other items were addressed in these reviews.

Three Archdiocese-qualified window contractors submitted bids. All were interviewed by Father Arthur, Mrs. Sokolowski, Mr. Wood, Ronald Reed (Archdiocese Project Manager) and Finance Council. The cost for this project includes replacement of the windows, asbestos abatement, and paint and plaster and is budgeted to be $886,000. In total, 88 large windows in all the classrooms and hallways are being replaced. 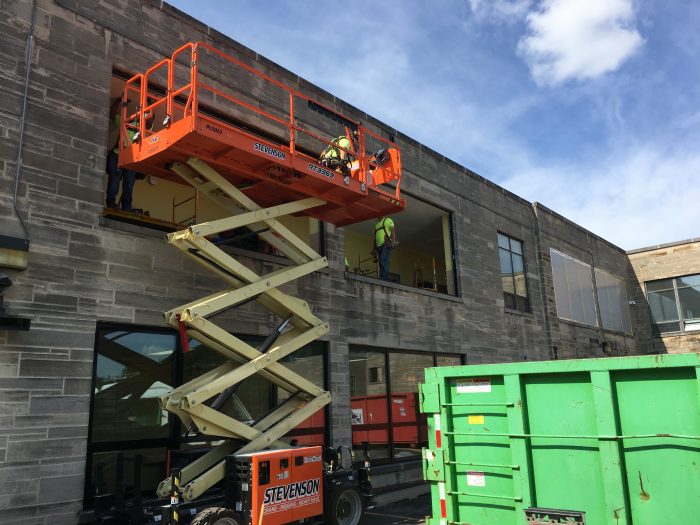 Funding for this much-needed capital improvement comes mostly from supportive parishioners who made pledges and contributions to the “To Teach Who Christ Is” campaign.

Renovation of the church in 2018 was the first project completed because of this archdiocesan-wide campaign. “It feels good to see this part of the campaign being completed,” Brady said.

Auburn Corporation is the contractor selected for this project because they submitted the lowest bid and because they committed to meet our summer timeline. The contract is held between Auburn Corp. and the Archdiocese of Chicago. 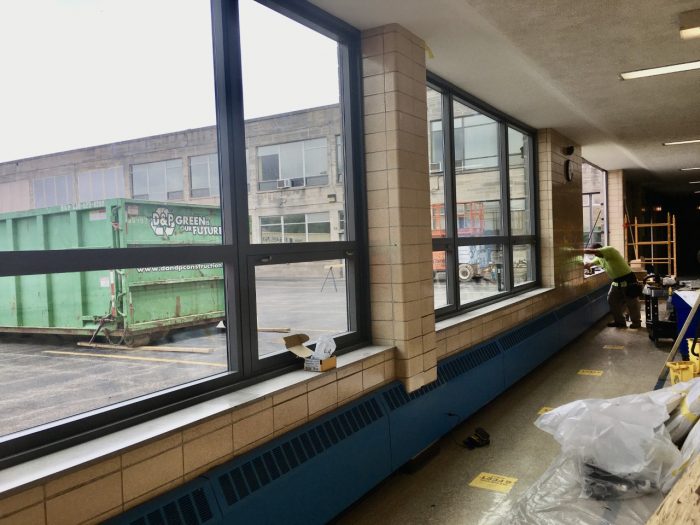 Window removal, including the removal of the original caulking and plaster which contain asbestos, as well as the temporary enclosures are by Celtic Environmental Company, a licensed abatement contractor. EGSL, a consultant for the Archdiocese, is monitoring this work. Additionally, parish management, as well as the parish maintenance team, are working with the contractors and consultants on coordination and safety to ensure that the work is completed on time and prior to the first day of school. 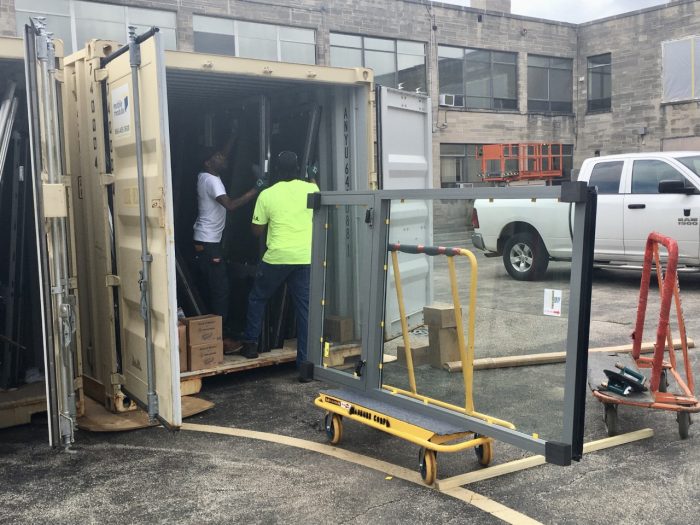 “To Teach Who Christ Is” is an archdiocesan-wide pledge campaign that focuses on strengthening parishes, benefiting Catholic education and enhancing faith formation. At OLW, the five-year campaign began in 2015. Parishes retained 60% of all funds they raised for their local needs and shared the remaining 40% with other parishes and ministries throughout the Archdiocese. Each parish submitted a case study identifying areas of improvement specific to their parish. The two specific areas identified for Our Lady of the Wayside were Church renovations and replacement of the elementary and middle school windows. 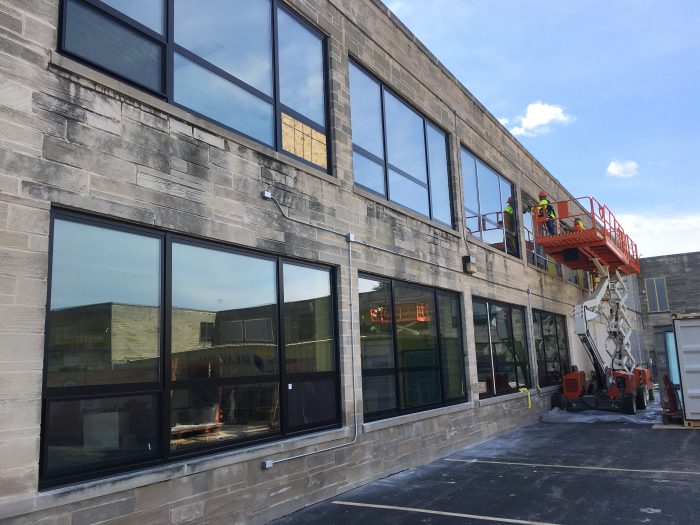 OLW raised $2,602,232 in pledges, keeping $1,561,339. The parish used 59% of those retained funds to refurbish the Church in 2018. The remaining funds are being used for the elementary school window replacement project. To date, the parish has received $594,882 in unused pledges. Canceled pledges amount to $494,846 and unfulfilled pledges are $47,714. The Parish Finance Council prayerfully hopes that parishioners who either let their original pledges lapse or canceled them, will reconsider and fulfill their commitment. Any shortages will have to come from parish savings.

To see more photos of the window installation, click HERE.