Posted on October 29, 2020 by Published by Sean Reilly 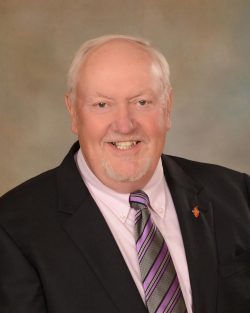 While he was growing up in Chicago, Deacon Don Grossnickle loved visiting his grandmother Maja, an immigrant from Sweden, and listening to her stories about her home country’s “enchanting winters, the Christmases, the sleighs, the horses, the beautiful lakes,” he recalled during a “Christopher Closeup” podcast interview (note: begins at 12:39). “The stories were so different than anything that I knew. It was almost like a Brigadoon kind of experience, where you just fantasized.”

But as Deacon Don set out to research his grandmother’s life in order to write a book about her, he discovered several family secrets that shed new light on the struggles she endured in the U.S. during the Great Depression. He shares those secrets in the book “My Maja.”

Growing up in her home country resulted in Maja developing “gritty Swedish gumption,” as Deacon Don calls one of her most prominent traits. “Farmers had to be resilient in the weather and find ways to earn enough money to get ahead.” That resilience became necessary for her survival here in the states after her husband died at age 35, leaving her a widow with three children. Maja had been trained as a night nurse in Sweden, but had focused on raising her children once she became a mother. After her husband’s death, which occurred during the Great Depression, Maja was forced to return to work to survive.Deacon Don explained, “Maja went to work 12-hour shifts taking care of wealthy people…She also converted the upper floors of her house into a boarding house, so she had three tenants upstairs…There were many times of the long hours of being a nurse, leaving at maybe 4:00 in the afternoon and getting home at maybe 8:00 the next day. And then getting the kids ready for school, taking care of the tenants, the stress and strain were terrible.”

Though Maja relied on her faith in God to sustain her, there were also times when she would exasperatedly pray, “What are you asking of me, Lord?”

“Maja suffered greatly,” said Deacon Don about several revelations he only discovered during his research into her life. “She became depressed. The stress and strain [led to] a nervous breakdown. Her children were taken away from her. That’s one of the secrets revealed in the book. Maybe I won’t tell all of them. But Maja never spoke about those incidents to me. My relationship was such that her focus was on what the Lord was asking her to do all the time. She didn’t look back necessarily on how tough it was, how she spent some time in this Chicago insane asylum, and she did the treatments necessary to get out, so she could rejoin her children. As far as I’m concerned, that’s about as gritty a gumption as any person would ever imagine.”

As a result of learning about his grandmother’s struggles – and with knowledge of the stigma that still surrounds mental illness – Deacon Don notes that his compassion has been deepened: “Every person that I see who is struggling with depression or with suicide tendencies, I can see the face of Maja in each of them, and know that with the Lord’s help, they can be strong.” Maja’s gritty gumption also worked its way into Deacon Don’s DNA, having absorbed many lessons from her life. For years, he worked closely with high school boys who had broken their necks playing sports and needed to learn to adjust to life with a disability. He has also recently created a ministry in Uganda that uses a microfinance program to lift people out of poverty and get them the medical care they need.

He explained, “I think the common theme is that there’s a lot of broken people in the world. We deacons are, by Scripture, looking at the widows and orphans and those that are cast aside by society – and we have a special heart to be there for them. That’s what the Lord asks all of us. The Christophers’ founder said that each of us has a certain calling, unique to each of us. And we can be there for others. So it wove its way [into me] watching what Maja did. She was selfless. It was all about being strong enough to rally, no matter what she faced.” Regarding his ministry in Uganda, Deacon Don said, “When I went to Africa the first time and saw mothers and babies dying of malaria, it broke my heart. And it motivated me, and it certainly connected with the Maja story, that she was broken also. Somebody needed to be there for her, and in my particular case, I believe it was Jesus. So I think the work is going great. We just opened a $25,000 mission in Nakifuma, Uganda, East Africa, a surgery center for mothers that need C-sections. Donors provided funds for all the equipment. We have a surgeon there in a little village. It’s absolutely amazing. I hope [your listeners] can look at our website, www.maapfoundation.org, and see the work that we’re doing. But we are growing. We have seven clinics, all associated with church related outreach, and it’s going just great.”

In closing, Deacon Don had these hopes for people who read his book: “‘My Maja‘ tells the story of a forgotten immigrant Swede widow. There are a lot of forgotten people in the world, and now that the book is global and the reviews are coming in, she’s no longer forgotten. The men of the world were well documented during the Great Depression. Well, forgotten women also need to be mentioned – heroes like Maja, who had valor, and yet, were broken and healed. Her story needs to be told, so I’m receiving great feedback from people that they’re becoming inspired. We all have family secrets, but we move beyond them with God’s help.”

To listen to the full podcast interview with Deacon Don Grossnickle, click the link below, beginning at 12:39

Deacon Don’s book is available on Amazon in paperback and for Kindle.