Posted on October 5, 2021 by Published by Sean Reilly

The Most Reverend Joseph F. Naumann expresses strong opposition to the Women’s Health Protection Act (WHPA) which would impose abortion on demand nationwide, eliminate pro-life laws at all levels of government, force healthcare workers to perform or assist in abortion, and force all Americans to support abortion with tax dollars.

I write to express strong opposition to the Women’s Health Protection Act (WHPA), H.R. 3755/S. 1975. This deceptively-named, extreme bill would impose abortion on demand nationwide at any stage of pregnancy through federal statute. Even worse, it would eliminate modest and widely supported pro-life laws at every level of government — the federal, state, and local level — including parental notification for minor girls, informed consent, and health or safety protections specific to abortion facilities. It would force all Americans to support abortions here and abroad with their tax dollars. It would also likely force health care providers and professionals to perform, assist in, and/or refer for abortion against their deeplyheld beliefs, as well as force employers and insurers to cover or pay for abortion. The details of this radical bill are more fully documented in this fact sheet.

As Pope Saint John Paul II observed, “At the center of the moral vision of [the American] founding documents is the recognition of the rights of the human person . . .” The greatness of the United States lies “especially [in its] respect for the dignity and sanctity of human life in all conditions and at all stages of development.”[1] This bill, however, would catapult our nation further away from this greatness by legislatively enshrining the killing of defenseless, voiceless human beings. And as Pope Francis stated regarding unborn children, “Their killing in huge numbers, with the  endorsement of States, is a serious problem that undermines the foundations of the construction of justice, compromising the proper solution of any other human and social issue.”[2]

This bill insists that elective abortion, including late-term elective abortion, is a “human right” and “women’s health care” — something that should be promoted, funded, and celebrated. In fact, abortion is the opposite of women’s health care, and is an extreme violation of human rights. It has no clear justification in terms of women’s health. Obstetricians and Gynecologists worldwide agree that it is never medically necessary to intentionally destroy an unborn child to save a mother’s life.[3] If an OBGYN needs to save a mother’s life after 20 weeks, that OBGYN will deliver that mom and baby in an environment where both can receive the life sustaining treatments necessary. Further, abortion may even harm women’s health, and their lives, including or especially low-income women. As soon as the Hyde Amendment prevented federal dollars from funding abortion, abortion complications for women affected by the policy went down.[4]

Answering the needs of women by promoting taxpayer-funded elective abortion, as this bill would do, is a failure to love and serve women. Offering free or low-cost abortions, instead of the resources needed to care for her child, is not “choice” but coercion. It communicates to a mother in need that there is no hope for her or her child and perpetuates injustices that drive mothers to end the lives of their children. As a nation built on the recognition that every human being is endowed by its Creator with the unalienable rights to life, liberty and the pursuit of happiness, we must reject this bill and embrace public policy that respects and facilitates these rights and needs of both mother and child.

The Catholic Church, through its numerous institutions and programs, consistently seeks to embody this life-affirming and supportive mission for every human life, regardless of its condition or stage of development. This is why the Church supports a robust social safety net for persons who are poor or otherwise experiencing hardship, supports the dignity and rights of migrants, and opposes the death penalty. And this is the reason why the Church supports, helps staff and fund pregnancy-help centers and ministries, and initiated “Walking with Moms in Need” (WWMIN). WWMIN is a nationwide initiative to engage every Catholic parish in providing a safety net to ensure that pregnant and parenting moms have the resources, love, and support they need to nurture the lives of their children.

In its assumption that abortion can be the only, or best, solution to a crisis pregnancy, the Women’s Health Protection Act is built on a false and despairing narrative. In treating abortion as the moral equivalent to the removal of an appendix, this proposal is radically out of step with the American public. I strongly urge you to reject this bill and to put the energy and resources of our federal government behind policies that recognize and support both mothers and their children. 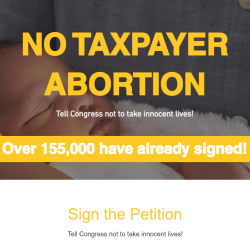 Join 155,000 Americans who have already signed the petition to tell Congress not to support the Women’s Health Protection Act (WHPA), H.R. 3755.