History of the Prayer to St. Michael the Archangel

Posted on February 23, 2021 by Published by Sean Reilly 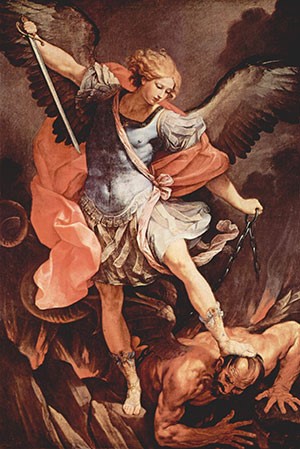 On October 13, 1884, Pope Leo XIII had a vision. When the Pontiff had finished celebrating Mass in his private Vatican Chapel, he suddenly stopped at the foot of the altar. He stood there as if in a trance, his face pale white, for about 10 minutes before going to his office. Shortly thereafter he composed the prayer to St. Michael, with instructions for it to be said after all Low Masses everywhere. When asked what had happened, he explained that, as he was about to leave the foot of the altar, he suddenly heard two voices – one kind and gentle, the other guttural and harsh. They seemed to come from near the tabernacle. As he listened, he heard the guttural voice of Satan tell God that he could destroy the Church if he had 75 – 100 years and greater power and influence “over those who would give themselves over to my service.” God granted this to him, just as He did many millennia ago, granting Satan power over Job.

In 1965 the obligation of reciting Leonine Prayers (Prayer of St. Michael, three Hail Marys, and three Hail Holy Queen) after Mass ended. While many parishes ended this practice, it was not forbidden. In 1994, Pope John Paul II recommended reintroducing praying the Prayer of St. Michael. “Although this prayer is no longer recited at the end of Mass, I ask everyone not to forget it and to recite it to obtain help in the battle against the forces of darkness and against the evil spirit of this world.” – Pope John Paul II, Regina Caeli, April 24, 1994

At the conclusion of 5:00 Mass on Saturday March 5, 2021, Fr. Arthur would like to begin praying the Prayer of St. Michael. It will be prayed at the end of all weekend and daily Masses for the foreseeable future.